Quietest Vitamix Blenders Reviews: Which is the Best?

As much as the blender is useful in a number of ways in the kitchen, the amount of noise produced when operating one can be really annoying.

Thanks to technology, newer models of blenders are becoming quieter to bring you some peace in the kitchen.

With the wide range of companies known to manufacture blenders, Vitamix is certainly no new name. The company has been known to produce high-quality blenders for quite some time.

It is, therefore, not a surprise that the Vitamix blenders will be some of the top priorities for anyone who is looking for a good blender.

The company has also produced some quieter models for those looking for one.

So, with all the blenders that the company produces, how do you settle for one? Which are the best Vitamix blenders on the market?

Well, I did all the hard work for you. So, take a look at this article to give you an idea of where to start looking for the best Vitamix blenders. 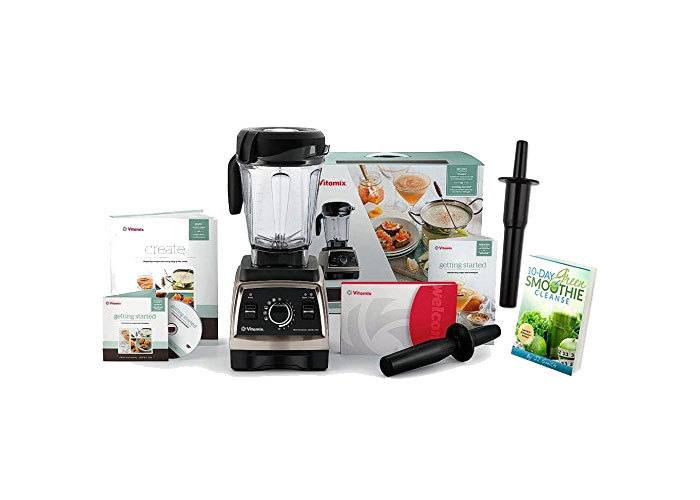 If you are out to invest in a worthy blender, then I would suggest that you take a look at this one.

Advertised as one of the quietest blenders that Vitamix ever made, the 750 model in the professional series is up to 40% quieter than other models by the same company.

Although this blender comes in quite pricey as compared to others, the features that come along with it make it a good investment.

Thanks to the stainless steel blade construction, you can be sure that the blender is durable and long lasting.

If you ask me, I would rather spend money and get a good appliance and be assured that it will serve me for a long time as opposed to a cheap one that will have me looking for a new one in no time.

The blender also features tow shatterproof carafes. These are heat resistant allowing you to process heated ingredients with no worry at all.

The blender uses 1200 watts of power and is able to reach 24000 RPM. Because of this, it has quite a superior airflow making it very efficient.

Now to the main question. What makes this blender quieter than the others?

Well, the sound enclosure technology has been used to ensure that the blender is much quieter than others.

The upgraded base unit system makes the blender quieter than others producing about 60-70 decibels of sound while in use.

The blender also comes with a 2 piece Santoprene rubber lid that besides making the blender quieter, it has a removable plug that allows you to add ingredients during use.

This blender is quite similar to the Professional Series 750 model above.

It has two standard containers that can be used along with the blender; a 64 ounce and a 48 ounce. Both of these are heat resistant allowing you to process heated ingredients at ease.

The blender features 1200 watts of power and is capable of reaching 24000 revolutions per minute. This ensures that the blender has superior airflow making it very efficient.

Another important feature of this blender is the pulse function which can be used at any speed. It also comes with a rubber lid attached to a removable plug to allow you to add ingredients while in use.

The lid also acts as a vent for releasing steam when processing hot ingredients such as sauce.

The blender is a top choice for anyone looking for something that allows you to make batters, soup, sauces, and fillings.

One of the major reasons people buy blenders is so as to be able to make smoothies that help them lose weight. Now, there’s nothing better than a quiet blender that comes with a bundle designed to help you stay in shape.

The Professional Series 750 Blender (1944) Bundle is one blender that you should highly consider if you are looking to stay healthy.

Just like the other Vitamix blenders featured in this article, the blender has a very powerful motor running at 24000 revolutions per minute. Thanks to this, the blender’s airflow is very superior making it very efficient.

It also comes with a two-piece lid that is attached to a removable lid allowing you to add more ingredients as you use the blender.

I was also impressed by the fact that the lid also acts as a vent and releases steam from the blender when processing hot ingredients.

The most important thing to bear in mind when making smoothies is the ability to control the texture and thickness of the smoothie. It is, therefore, quite an important thing to notice that the blender comes with a pulse function.

Because of this, you are able to have complete control over your food allowing you to make smoothies and other foods to your precision.

I must admit, however, that the most eye-catching feature was the bundle that comes along with this blender. If you are looking to start a healthy and clean-eating lifestyle, then you will enjoy the bundle very much.

The bundle includes a paperback by JJ Smith. The book covers some of the most basic recipes for making over 100 smoothies.

Because it is ideal for processing hot ingredients, the blender is made of heat resistant materials.

The containers are also shatterproof and the blender is overall made of stainless steel. Because of the high-quality materials used, this blender is known to be strong and durable serving you for quite some time.

On The Quietest Vitamix Blenders

I must say that picking an overall best blender among these three was a tough decision. This is because Vitamix is known for taking the time to actually come up with high-quality products.

All these three blenders utilize the upgraded base unit system to ensure that they are much quieter than other blenders in the market.

They also have very powerful motors that make them quite efficient.

So, which is the best quiet Vitamix Blender?

Although this was tough, I had to settle for the Vitamix Professional Series 750 Blender (1944) Bundle. Although it comes in at a much higher price, I wanted to go for something that was a bit different from the rest.

The Vitamix Blenders are quite similar. This one, however, came with the extra smoothie recipes. For anyone who wants to start on a weight loss journey, this blender would make the ideal product.

When all is said and done, the most important thing to bear in mind is the fact that you are looking for a quiet blender. For this, the blender should produce a maximum of 70 decibels when in operation.

Choosing from all the quiet blenders available can be a daunting task.

However, with this guide, I hope to have given you a head start. So, go on and such for your best quiet Vitamix Blender!